The History of Valentine’s Day & Other Interesting Facts

On February 14th, all across the world, loved ones exchange greeting cards, chocolate candy, flowers, and other tokens of affection all in the name of St. Valentine. But what do we really know about the origins of this holiday of love? Who is this saint, and where do these traditions come from?

The Catholic Church actually recognizes three different saints named Valentine or Valentinus, all of whom were martyred. That said, one popular legend contends that Valentine was a priest who served in Rome during the third century. When Emperor Claudius II decided that single men yielded better soldiers than men who were married with families, he outlawed the marriage of young, able-bodied men. The priest, Valentine, saw such injustice in this decree that he defied the ruler, continuing to perform marriages in secret. When discovered, Claudius ordered that the priest be put to death.

Valentine’s According to the Ancient Romans

While some believe that Valentine’s Day is celebrated mid-February to commemorate the anniversary of the death of Valentine, which likely occurred around A.D. 270, others claim that the Christian church may have decided to set St. Valentine’s feast day in the middle of the month in an effort to Christianize the pagan celebration known as Lupercalia. Lupercalia was celebrated at the ides of February (February 15th) and was a fertility festival dedicated to Faunus, the Roman god of agriculture, as well as to Roman founders, Romulus and Remus.

Although written Valentines didn’t begin to appear until after 1400, Valentine greetings date back to as early as the Middle Ages. The oldest known valentine still in existence today was a poem written by Charles Duke of Orleans to his wife in 1415 while he was imprisoned in the Tower of London. That particular artifact is now a part of the manuscript collection of the British Library in London. 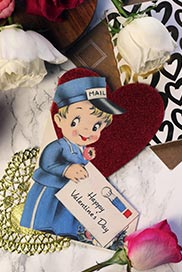 By the middle of the 18th century, Valentine’s Day began to be popularly celebrated. It became custom for friends and lovers of all social classes to exchange small tokens of their feelings, including handwritten notes. By 1900, printed cards began to replace the letters as a result of improvements in printing capabilities.

Though Americans probably began exchanging hand-made valentine notes in the early 1700s, it wasn’t until the 1840s that Esther A. Howland began selling the first mass-produced valentines in America. Known as the “Mother of the Valentine,” Howland made elaborate valentines with real lace and ribbons, as well as colorful pictures. Today, people continue this tradition of sending cards, and it’s estimated that each year, roughly 145 million Valentine’s Day cards are sent each year.

Vinegar Valentines– During the Victorian Era, those who didn’t want attention from certain suitors would anonymously send “vinegar valentines,” also sometimes referred to as “penny dreadfuls,” to ward them off. These cards were filled with comical insults and rejections for unwanted admirers.

Wear Your Heart on Your Sleeve– The turn of phrase “wear your heart on your sleeve” may have originated from a Roman festival during the Middle Ages during which men would draw the names of women who they’d be coupled up with for the upcoming year, wearing those names on their sleeves to show their bond during the festival.

The Beginning of Cupid– The cherub sporting a bow and arrow that we all recognize as Cupid has long been associated with the Valentine holiday; however, before he was renamed “Cupid,” this figure was known to the ancient Greeks as Eros, the god of love. The son of Aphrodite, Eros used two sets of arrows, one for love and one for hate, in order to toy with the emotions of his targets.

X Means Kiss, But Why?– We’ve come to recognize x as a symbol for a kiss, but where does this meaning come from? The use of the letter X came to represent Christianity or more specifically the cross in the Middle Ages. During that time, X was used to sign off on documents, and after marking them with the X, the writer would often kiss the mark as a sign of their sworn oath. Those records were said to have been “sealed with a kiss.”

Though Valentine’s Day has an intriguing history, it’s become something we look forward to celebrating now with our friends, families, and significant others. There’s never a bad time to show a little love to those around us, but it’s also nice to have a whole day each calendar year to dedicate to doing just that. Here’s hoping you can show and feel some love this February 14th, and every other day of the year too!